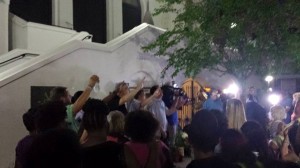 “I stood between a black man and a black lady right in front of the church. Holding their hands in worship, singing and praying together. They are no longer my “black” friends, they are my friends.”

That quote is from a conversation my friend Beth and I have been carrying on over these difficult and remarkable days. In an act of blatant racist hatred, one white man entered the historic Mother Emanuel AME church in Charleston, South Carolina, sat for an hour with a bible study group and then opened fire on the participants, all of whom were black. He killed nine church members, including the pastor, the Reverend Senator Clementa Pinckney.

The city of Charleston, and indeed the whole of the country, has reeled from the impact. The efforts to understand, explain, categorize, this one event have been astounding. There are those who call it an act of terrorism, others who suggest that the killer was mentally disturbed. The collective pain of those who recognize in it how far we have yet to go in this country to experience a deep healing and respect for all regardless of color or creed is palpable.

On a personal level, I immediately wondered what my friend Beth, born and raised in South Carolina, was thinking about what was going on in her hometown. Beth has lived all but a few years of her life in the Charleston area, and takes tremendous pride in being a Southern woman. We are something of a study in contrasts, as I am one of those “damned Yankees”, never mind that I have lived elsewhere than my native New York City for a good part of my life. I am also Jewish, and I am reasonably certain that Judaism is a relative mystery to her. Though we have spoken frankly with one another about many things, in the wake of the church shooting, with the killer’s white supremacist motivation, I wondered what I would discover in my friend, now that her beloved hometown was under a microscope and caught in the high beams.

I think that sharing some of our conversation, conveyed through written messages, does a better job of telling than I could do on my own. Shared with Beth’s permission. Photo credit: Beth Summers

At Mother Emanuel AME church for services in the days before Reverend Pinckney’s funeral:

Wonderful evening! So glad I went. I debated because I knew it would be very late getting home, but it was so worth it. Not in my dreams would I have imagined, even one week ago, that there would be such a gathering at Marion Square. All ages and races gathered together. I stood between a black man and a black lady right in front of the church. Holding their hands in worship, singing and praying together. Yes, they are no longer my “black” friends, they are my friends. I saw a white minister break down and beg his “colored” brothers and sisters to forgive him, and he repented for his sins. A woman walked up to him hugged him and told him “I forgive you”, and one by one most did the same. The outpouring of forgiveness was incredible. There were about 10 different ministers from all denominations, and each spoke briefly. Very powerful experience! So proud of the unity, and proud to be a part of it.

On the Confederate flag:

So, Strom Thurmond’s son, Senator Paul Thurmond, has called for the Confederate flag to come down. I am really shocked about that, as well as about many of the others who are changing their views. It won’t be an easy battle for them. McConnell made sure when it was moved in 2000 that it would be almost impossible to touch it again. But there is hope!

Did I tell you my family has one of the Confederate flags that flew over the Capitol Dome? Yep, about $2,000 was bid for it. They changed it out each day and donors were able to take them home.

I need to ask Alex. It has to be somewhere in his home. It’s properly folded and encased in a frame, where it belongs, just like the one flying in Columbia. That needs to be placed in a museum.

Reflections on racial tensions in the past, and parallel experiences as an “out” lesbian:

I still recall a day about 20 years ago. I walked into my own church, and I could feel the uneasiness among those gathered outside the sanctuary. I heard whispering and even one say, “I will not go in there today”. As I entered I looked around and I saw a young black girl sitting with the daughter of one of the members, along with several other young girls. The girl had a slumber party the night before, and brought all her friends to church. I was shocked by the fact that so many reacted so strongly to this. Unfortunately, the attitude of that church remains the same today. It is somewhat better due to implementing the Upward basketball program and all are invited for that, but their feelings about the actual worship hall remains the same. Then there is the fact that the last time I attended a worship service there, only one lady spoke to me. That was after Bill and I split, and they all found out I was a lesbian. I no longer felt welcome. I did attend the service when Alex did part of the sermon not too long ago, as well as for Bill’s funeral and the funeral for the father of a friend of mine. Many speak with me now, but I still don’t feel welcome. I started thinking about all that last night and how prejudiced and narrow thinking that church is even today. It’s sad. But there is always hope, there must be hope for change.