I had the great pleasure of hiking and camping in mid-October at the Cochise Stronghold campground, in the Dragoon Mountains within the Coronado National Forest in southeastern Arizona. I arrived late morning, and enjoyed a hike before setting up camp. At 5,000 feet, it gets chilly once the sun sets at that time of year, but the granite walls and sheer cliffs that surround the campground act to reduce winds that might otherwise make tent camping a bit uncomfortable overnight. With virtually no chance of rain, and little to no perceptible wind, I was able to enjoy a rain tarp-free experience, hunkering down into my sleeping bag as I peered through the mesh of my tent and watched the sky darken and fill with stars. At early morning, I was able to view the sky as it lightened and the sun came over the cliffs, the stars fading from view. I shared the entire campground with just one other camper. He arrived about an hour before sunset. I had two thoughts when he pulled in: “aw, I thought I’d have the place to myself tonight!”, and “should I be concerned?” My gut said it would be fine, that he was just camping out like me, and I was correct. We spoke briefly upon his arrival, then went about our respective business.

I had been sitting and eating my dinner when he pulled into the site. As there is no water whatsoever at that campground, I didn’t attempt to cook rice or pasta or anything that would’ve made excessive demands on my water supply (cooking and cleaning). I boiled some water, first for coffee, which I enhanced with a shot of bourbon, and then boiled more water to heat up a food packet filled with a tasty Indian spiced side dish. With that, some crackers and nuts, and the brew, I was set. While I ate, I wrote down some of my thoughts and feelings about the recent death of an old friend. Betty and I met when I was at college in upstate New York. The mom of the young man I became engaged to (but did not marry), we were close for many years beyond that time. I felt like an extended family member for a long time. Circumstance and distance changed things about 10 years ago, but we remained friendly, with my link to her eldest son keeping me abreast of developments when her health took a serious turn for the worse. Pancreatic cancer ultimately took her from this life. She died a few days after I started my journey, days before I arrived at this stronghold. I felt her presence as I sat on the bench, eating my simple meal and writing about her, about who she was as I understood her, and about her influence on my life. She taught me many things about relationships, family, devotion, and the little things that people do for each other to show love. She had a faith in God that I did not fully understand, yet I loved being around that part of her, because I felt like whatever it was that made her so special was intricately woven by that fabric, and I hoped it would rub off on me. I think it did, somewhat.

I heard so many birds calling as sunset came to the campground. Earlier in the afternoon, there were two woodpeckers nearby just having a ball, flitting here and there, banging away at trees, squawking, looking askance, I’d swear, at my feeble attempts to photograph them, to capture a focused shot or two. As I listened to the sounds around me, I remembered how thrilled Betty was for me at the success of my first cochlear implant, the technology that has allowed me to hear again after decades of severe hearing impairment. A musician, it must’ve saddened her more than she let on that I was losing my connection with the hearing world, especially with music. So as I retired to the camp tent for the night, I reflected on how much she meant to me, and how she made me feel like I mattered to her, and how cheered she would be to know that I could hear all those marvelous, musical sounds in the natural world again. 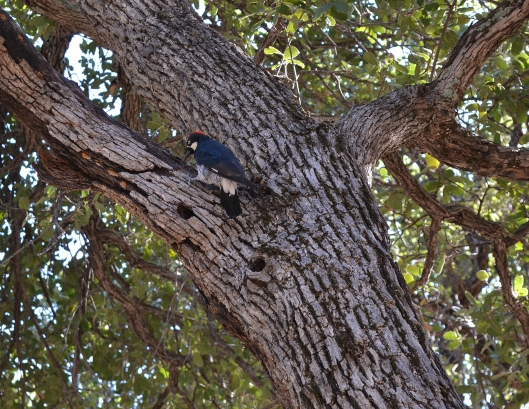